Trans-Inclusive Education: a guide for teachers and advisors: Trans 101

Gender is not the same as sexuality! 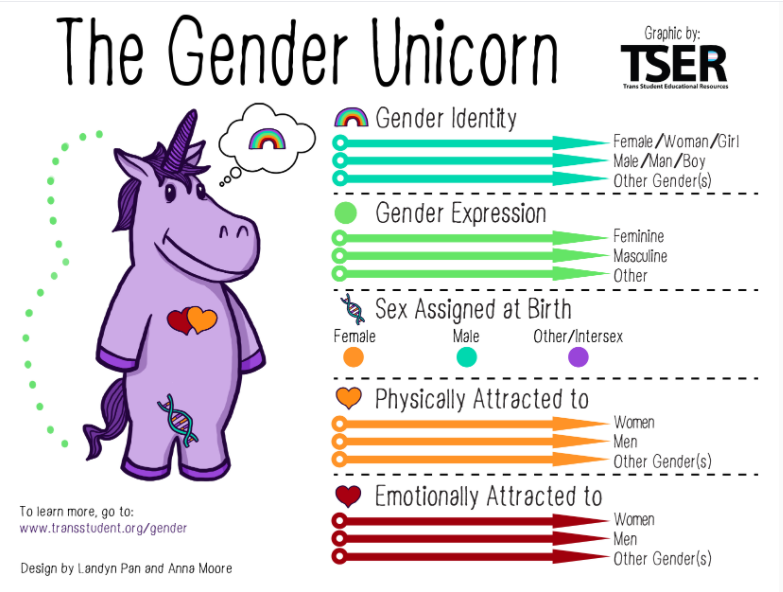 This graphic provides a way to visualize the difference between gender identity (a person's internal sense of themselves), gender expression (the physical manifestation of one's gender)  sex assigned at birth (the classification of an individual based on anatomy and chromosomes) and who they are attracted to (sexual, emotional, and romantic orientation.) This graphic helps visualize that people's identities fall on a spectrum and that it's possible to identify in more than one way.

This graphic was prepared by Trans Student Educational Resources (TSER), a youth-led organization whose mission is to foster a trans-friendly educational system and empower trans youth. TSER has up to date resources that are that are developed by and for trans people. TSER's website has excellent resources for teachers including a glossary of terms, sample policies, additional graphics, and links to other relevant websites. Trans people are the experts about trans experience and in thinking about how to make our campus accessible and welcoming, it's important to listen to trans voices. 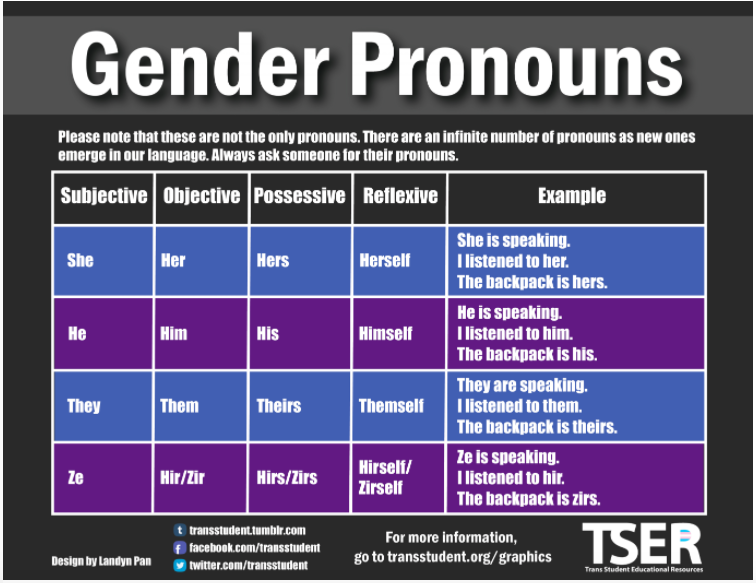 This chart gives examples of four common pronouns and how to use them grammatically. Please note, there are no male or female pronouns. Any of these pronouns may be used by people of any gender (or by people without a gender). Rather than making assumptions about someone's pronouns, just ask!

This graphic was prepared by Trans Student Educational Resources (TSER), a youth-led organization whose mission is to foster a trans-friendly educational system and empower trans youth. TSER has up to date resources that are that are developed by and for trans people. TSER's website has excellent resources for teachers including a glossary of terms, sample policies, additional graphics, and links to other relevant websites. Trans people are the experts about trans experience and in thinking about how to make our campus accessible and welcoming, it's important to listen to trans voices.

How to use the right pronouns and why it matters

This short video is a part of an Everyday Feminist web-series. Dennis gives examples of how English speakers casually use "they" as a singular pronoun, offers a brief history of how English pronouns have evolved, and defends the use of singular "they." This video is helpful for those who feel uncomfortable using "they" as a singular pronoun or are frustrated by a perception that this structure is not grammatically correct. Although Dennis does not provide citations, her video is informative and jargon-free. Further, her perspective as a trans person is valuable.

This video edited by Seventeen Magazine interviews five trans teenagers about their gender and pronouns. The teens discuss their experience being misgendered and the psychological harm this causes. The teens represent a range of racial and gender diversity. This clip offers a response to those who find using a student's pronouns to be a hassle and who don't understand the impact.

Cisgender/Cis: term for someone who exclusively identifies as their sex assigned at birth. The term cisgender is not indicative of gender expression, sexual orientation, hormonal makeup, physical anatomy, or how one is perceived in daily life.

Gender Expression/Presentation: The physical manifestation of one’s gender identity through clothing, hairstyle, voice, body shape, etc. (typically referred to as masculine or feminine). Many transgender people seek to make their gender expression (how they look) match their gender identity (who they are), rather than their sex assigned at birth. Someone with a gender nonconforming gender expression may or may not be transgender.

Gender Identity: One’s internal sense of being male, female, neither of these, both, or other gender(s). Everyone has a gender identity, including you. For transgender people, their sex assigned at birth and their gender identity are not necessarily the same.

Genderqueer: An identity commonly used by people who do not identify or express their gender within the gender binary. Those who identify as genderqueer may identify as neither male nor female, may see themselves as outside of or in between the binary gender boxes, or may simply feel restricted by gender labels. Many genderqueer people are cisgender and identify with it as an aesthetic. Not everyone who identifies as genderqueer identifies as trans or nonbinary. Nonbinary (also Non-Binary): Preferred umbrella term for all genders other than female/male or woman/man, used as an adjective (e.g. Jesse is a nonbinary person). Not all nonbinary people identify as trans and not all trans people identify as nonbinary. Sometimes (and increasingly), nonbinary can be used to describe the aesthetic/presentation/expression of a cisgender or transgender person.

Sex Assigned At Birth: The assignment and classification of people as male, female, intersex, or another sex assigned at birth often based on physical anatomy at birth and/or karyotyping.

Sexual Orientation: A person’s physical, romantic, emotional, aesthetic, and/or other form of attraction to others. In Western cultures, gender identity and sexual orientation are not the same. Trans people can be straight, bisexual, lesbian, gay, asexual, pansexual, queer, etc. just like anyone else. For example, a trans woman who is exclusively attracted to other women would often identify as lesbian.

Transgender/Trans: An umbrella term for people whose gender identity differs from the sex they were assigned at birth. The term transgender is not indicative of gender expression, sexual orientation, hormonal makeup, physical anatomy, or how one is perceived in daily life. Note that transgender does not have an “ed” at the end.

Transition: A person’s process of developing and assuming a gender expression to match their gender identity. Transition can include: coming out to one’s family, friends, and/or co-workers; changing one’s name and/or sex on legal documents; hormone therapy; and possibly (though not always) some form of surgery. It’s best not to assume how one transitions as it is different for everyone.

Transsexual: A deprecated term that is often considered pejorative similar to transgender in that it indicates a difference between one’s gender identity and sex assigned at birth. Transsexual often – though not always – implicates hormonal/surgical transition from one binary gender (male or female) to the other. Unlike transgender/trans, transsexual is not an umbrella term, as many transgender people do not identify as transsexual. When speaking/writing about trans people, please avoid the word transsexual unless asked to use it by a transsexual person. 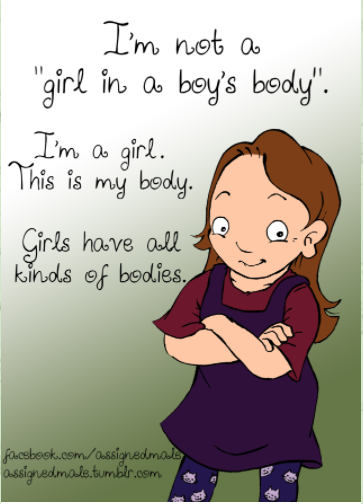 "Assigned Male" is a comic written and illustrated by Sophie Labelle that is available online through FaceBook and Tumblr. Labelle's work is inspired in part by her own experience as a trans woman. Her comic breaks down in accessible ways the beauty and joy of trans life and the impact of transphobia. This is an excellent, quick source for teachers looking to better understand the experience of trans people. Labelle defines the terms she uses and her work is easy to understand. Labelle updates her site three times a week.  Print versions of Labelle's work are also available for purchase on Etsy.com